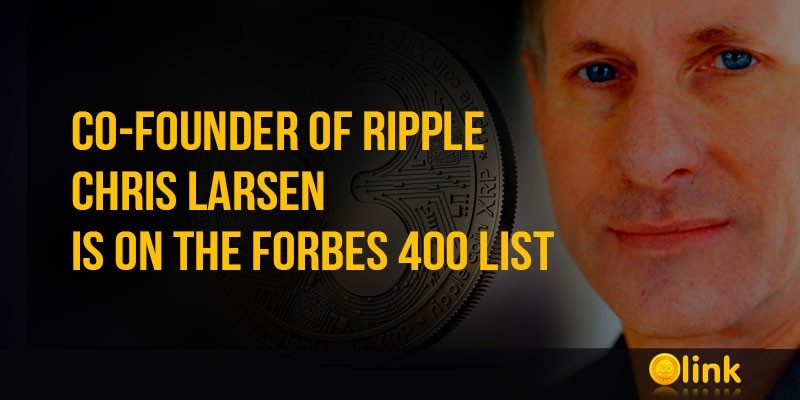 Ripple co-founder Chris Larsen entered the Forbes 400 list this year. He was the 383rd among the richest people in the world in the opinion of the publication, and became the first who entered the list due to the state earned exclusively on cryptocurrencies.

Last week, Forbes released the new Forbes 400 list. Larsen's fortune is estimated at $ 2.1 billion, placing him at 383rd place. The leader of the ranking was Jeff Bezos, who earned $ 78.5 billion over the last year, who dismissed Bill Gates, who occupied the first place in the list for 24 years, from this position. In addition to Larsen, Drew Houston, CEO of Dropbox, made his debut in the rankings.

The rich are getting richer - in order to be included in the Forbes list this year, candidates had to have a fortune of at least $ 2.1 billion dollars - the highest minimum than ever before. The average net worth of participants in the ranking also increased by half a billion to $ 7.2 billion - also the highest figure in the entire history of the list.

Earlier in 2018, the Credit Suisse report said that one percent of the richest people in the world own more than half (50.1%) of the total world wealth, moreover, by 2030 this figure could increase to two-thirds.

Thanks to Ripple, the state of its CEO Brad Garlinghouse in January was about $ 9.5 billion. However, due to the volatility of the XRP markets and cryptocurrency, its net worth fell below the threshold required to enter the Forbes 400 list.

Ripple can still increase both the state of Larsen and the Garlinghouse, as well as other XRP investors. The news about the launch of the Ripple xRapid cryptocurrency interbank system to ensure international payments pushed the XRP price up at the end of September. However, the news did not help to maintain the increase in the cost for a long time - soon the XRP price dropped to the current value.

In February 2018, Forbes published the Crypto Rich List, which has not yet been updated to reflect the fall in the market this year. Larsen ranked first on this list, followed by Joseph Lubin, co-founder of Ethereum and founder of ConsenSys. In third place was Binance CEO Changpeng Zhao.