Tim Draper: "Bitcoin is the safest way to store money" 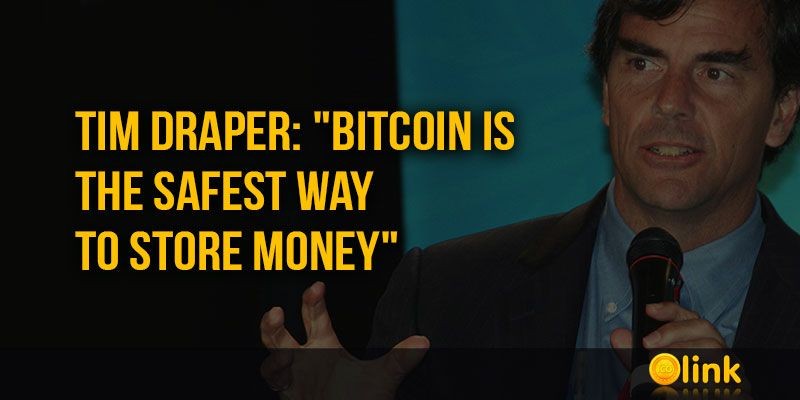 Tim Draper, an American venture capitalist and founder of Draper Fisher Jurvetson (DJF), made another statement on Bitcoin on CNBC's "Closing Bell" television show on Thursday. He said that the most popular cryptocurrency in the world is "the best option for investing money." Draper has more than once publicly stated his love for crypto-currencies - even over the past six months, he often spoke about their advantages. He recently said that by 2022 Bitcoin would cost $ 250,000, and in February of this year he predicted that "cryptocurrencies will conquer the world". In the autumn of last year, he made an even bolder statement, saying that in five years the cryptocurrencies would take the place of fiat money. Last week, he also did not miss the opportunity to once again sing Bitcoin.

"There's a major revolution taking place that is now allowing for a better currency — one that is more secure, that is decentralized, that is more effective, more useful. It's global. It's open to everyone. It banks the unbanked. It allows people to send their money to their families in the Philippines or in Mexico without any big friction. It is a far better currency than the fiat currency."

"Right now, your banks are being attacked all the time. The hackers are poking holes in your banks and going after your fiat money and the bankers are pounding away trying to keep the hacks away but they're getting hacked all the time. No one has ever hacked the Bitcoin blockchain. It is the most secure place to put your money. So as a store of value it is a great place to be."

Although this may seem stupid for an uninitiated or skeptical investor, Draper called for thinking about the state of the currency in countries with crumbling economies. He said:

"If you're in Argentina or Venezuela or Nigeria you know that your currency is going to fall 30 percent every year, because, I mean, those countries tend to implode about every year. And people lose their fortune. Well, if part of your fortune is put into Bitcoin, you're not going to lose your fortune."

Finally, Draper told CNBC reporters that Bitcoin is not just a fad. Rather, it is the "future of the world". He explained:

"There are many many reasons [and] many many uses. […] This is going to be a major change in the future of the world. It's a major breakthrough and I can't wait for us to be sort of one world with our currencies as opposed to having it tied to some political influence or another, or some government just decides to inflate or decides that they're just going to take a bunch of currency. This is a great opportunity for the people to run their businesses unfettered by political whims."