John McAfee: Eat my dick in 12 months? A ruse to onboard new users 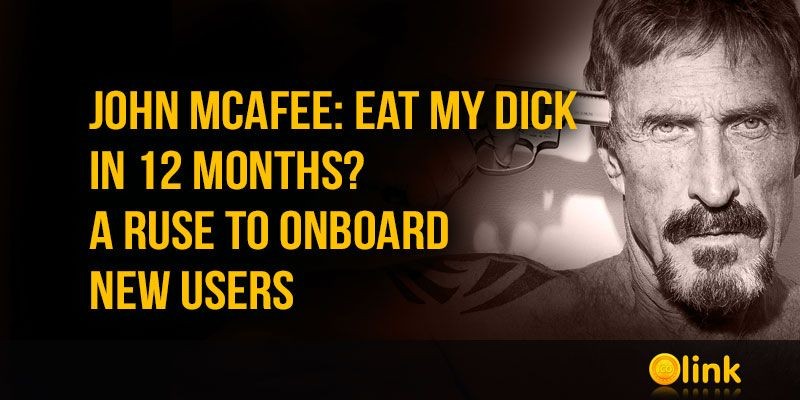 Cryptocurrency enthusiast John McAfee, known for his eccentricity, said that he would not eat his intimate body, despite the fact that the Bitcoin exchange rate had not reached $ 1 million by 2020.

Back in mid-2017, McAfee said that if by the beginning of 2020 the rate of the first cryptocurrency does not rise to $ 500,000, then he would cut and eat his genitals. After a while, against the background of a bullish spurt in Bitcoin, he increased the rate to $ 1 million. Later, McAfee repeatedly confirmed the forecast, but now he refused his words, saying on the social network Twitter that he was only attracting attention.

"Eat my dick in 12 months? A ruse to onboard new users. It worked. Bitcoin was first. It's an ancient technology. All know it. Newer blockchains have privacy, smart contracts, distributed apps and more. Bitcoin is our future? Was the Model T the future of the automobile?"

This passage caused a lot of comments in which some users called McAfee a coward and expressed their disappointment, while others said that some altcoin would become the future of the cryptocurrency industry. One of them called XRP "the new Bitcoin," but, according to McAfee, this will not happen.

Recall that in the middle of last year, John McAfee, the founder of McAfee, a cybersecurity company, launched the Magic cryptocurrency platform. Then, in October, the decentralized McAfeeDex token exchange was launched.

Wow, man seems crazy, but still we are fond of his style!