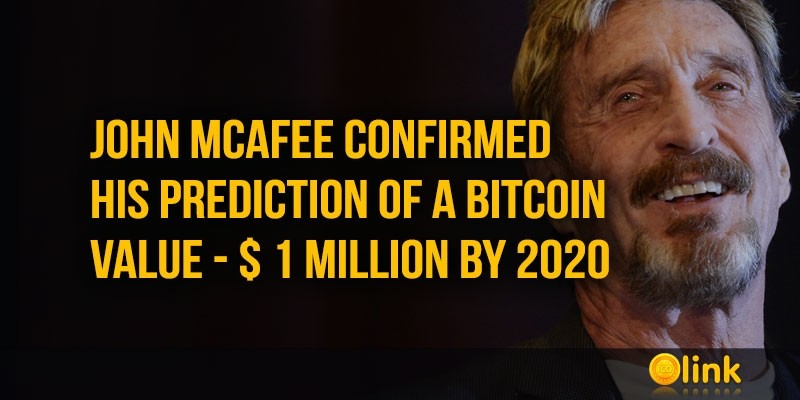 The eccentric cryptocurrency enthusiast and creator of one of the first antivirus companies, John McAfee, once again confirmed his opinion about Bitcoin for a million dollars by 2020. Moreover, according to him, this is a very conservative forecast.

Despite the significant market downturn and Bitcoin prices, McAfee remains calm and optimistic about his prediction.

"It's very simple, I'm a mathematician. As you run the numbers, the number of people using Bitcoin and the number of transactions, it's escalating tremendously. That's the true value… The true value is going to eventually be based upon usage and if you track the usage curve, a million dollars by the end of 2020 is conservative." said the pioneer of the antivirus industry.

McAfee also expressed his opinion about the traditional financial system, according to which it worked well in the past, but today it is no longer suitable for use. He noted that a financial system that allows inflation or deflation of currencies to occur puts an end to real freedom.

Interestingly, if his forecast of a significant devaluation of fiat currencies comes true, the purchasing power of $ 1 million will also noticeably decrease. In addition, cryptocurrencies, on the contrary, will be appreciated more and more.

Recall that earlier, a well-respected Bitcoin researcher and cryptocurrency in the community, Willy Woo announced that every 12 months the number of Bitcoin users is about doubled.

Recently, venture investor Tim Draper confirmed his forecast of the rise in the price of Bitcoin to $ 250,000. Forecasts on the price of the first cryptocurrency are quite popular, but most analysts expect a gradual increase in assets.