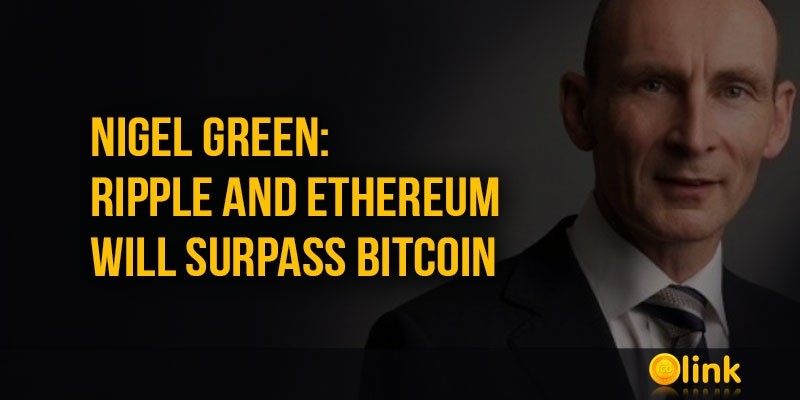 The head of deVere Group, Nigel Green believes that in the coming years, the superiority of Bitcoin in the cryptocurrency market will significantly decrease. However, this will not prevent the first cryptocurrency to grow by another 5000%.

Green, however, recognizes the merits of Bitcoin and the revolution accomplished by this cryptocurrency, but believes that new technologies and cryptocurrencies will surpass the progenitor in time.

In an interview with CCN, Green pointed out the top industry favorites — Ripple and Ethereum. The main advantage of XRP, by his opinion, is its involvement in financial institutions and its orientation towards international transfers, while many companies based on this blockchain and global acceptance in the industry support Ethereum.

"I believe that…XRP will be one of the main digital assets to dent Bitcoin's market share over the next few years due to its apparent focus on integrating with banks and other financial institutions." Green said.

"I don't want to ruin someone's hopes, but I think that the superiority of Bitcoin in the cryptocurrency sector will greatly decrease. Just because there are more and more new assets, both in the private and public sectors, continued the head of the deVere Group.

"Another one would be its current main challenger Ethereum. This is because a growing number of platforms are adopting Ethereum as a means of trading; there's an increasing use of smart contracts by Ethereum; and due to the decentralization of cloud computing."

"Whilst I don't wish to rain on anyone's parade, I believe that Bitcoin's influence and dominance of the cryptocurrency sector will drastically reduce in its second decade," he continued. "This is because as mass adoption of cryptocurrency grows, more and more digital assets will be launched – by organizations in both the private and the public sectors. This will increase competition for Bitcoin and dent its market share."

However, according to Green, Bitcoin still has a bright future. Thanks to the ever-increasing adoption of the first cryptocurrency and the desire of institutional investors to enter the cryptocurrency market, the price of Bitcoin can soar phenomenally in the coming years.

"There's an ongoing shift away from fiat money, and the momentum of this is only set to increase over the next 10 years. The pace of mass adoption will speed-up and the cryptocurrency market cap can reasonably be assumed to reach at least 5,000 per cent above its current valuation over the next decade," he said.

Note that earlier cryptocurrency expert Bobby Lee expressed the opinion that over the next 20 years, Bitcoin could reach the level of a million dollars for 1 BTC.