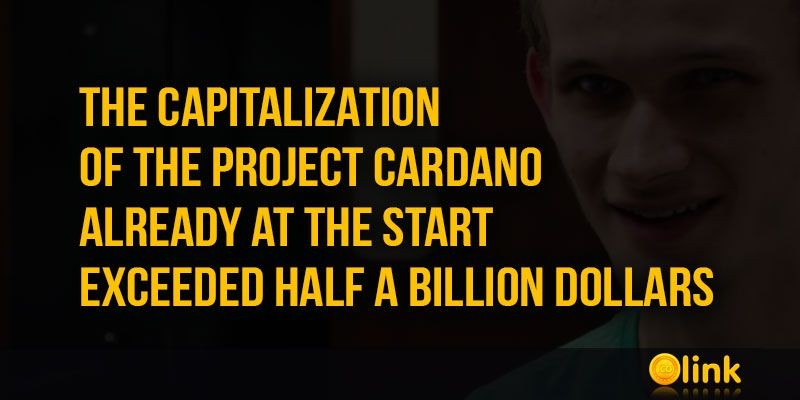 Charles Hoskinson, one of the first developers of the Ethereum, left the team of Vitalik Buterin before the start of the blockchain, and his company IOHK launched their own blockchain Cardano. Already four days after the launch, ADA's capitalization, the internal token of Cardano, exceeded half a billion dollars at a daily trading volume of $ 100 million. The capitalization of ADA did not come from scratch. Since the beginning of 2017, the project has conducted a series of ICO, or, in the terminology of the team, sales of vouchers, collecting a total of 108,844.5 Bitcoins, which is the same half a billion. Almost the entire amount of collected funds is of Asian origin - according to the audit report, these are investors from Japan, Korea, China, Thailand, Malaysia, the Philippines, Taiwan and Vietnam.

Thus, given the amount of attracted financing, investors can not yet boast a significant profit, however, the situation can easily change, both in the positive and negative aspects. The first question to Cardano: why do we need another blockchain?
The answer to this question is not so simple, because the project lacks the White Book. The only document describing the new platform is more like an advertising brochure, which lacks technical details.
The main difference from existing systems is that the founders call the separation of computational layers. The platform consists (or will consist) of a base layer for handling ADA tokens, and a second layer for placing smart contracts. This resembles the concept of Rootstock, built over the Bitcoin protocol, or numerous projects with the removal of laborious calculations beyond the main blockchain of the Ethereum.
As for scalability, at the first stage Cardano's throughput will be limited to 5 to 7 transactions per second, but in the future the team plans to increase it using special nodes designed to handle only a part of the transactions. The closest analogue of this scheme is the shading in the Ethereum.
The key element of the network is a kind of consensus DPoS (Delegated PoS, as in Bitshares and Steemit). The project team states that the protocol was audited in academic institutions, but the audit itself is not published anywhere.
Nevertheless, the developers of the project cooperate with the University of Edinburgh, and work on the control system of the blockchain is conducted jointly with the University of Lancaster.
Given Hoskinson's continued cooperation with the Etheric Classic, however, leaving no noticeable traces in the history of the ETC, it is not surprising that in his program document he often recalls TheDAO:
History can not be changed. Blockchains provide unchangeability. Rollback of transactions or change of records in the blockchain cause too strong a temptation to change the past in favor of a particular participant.
Considering that the capitalization of the Ethereum was $ 1 billion during the TheDAO's history, and now (if counted together with the capitalization of the tokens) is about $ 40 billion, while the ETC is worth about $ 1 billion, it is reasonable to assume that the collective decision to prevent the theft of $ 60 million was highly appreciated by the market.
Even assuming that the market is wrong, it's still not clear how developers can prevent a collective decision to fork, if the concept itself Cardano assumes both soft and hardcore. Jane Wild, responsible for working with media at IOHK, told Trustnodes portal:
The management system, voting and economic model will be implemented in Cardano during the next year. Users will be able to vote for making any changes to the protocol. IOHK will remain the lead developer until 2020, but subsequently the decision on the development of the protocol will be accepted by users. [...] Any user with a share of ADA tokens has the right to vote, according to a management mechanism being developed in conjunction with the University of Lancaster. Specific solutions will be detailed in the project road map, which will be published in the near future.
Next question Trustnodes: Does Cardano see his rival the Ethereum?
We do not consider Ethereum as a direct competitor; because their technology is a 2.0 blockchain, while we are the third generation of the block, in which there is an interoperability of many of the blockchains, and the management mechanism can be scaled.
Of course, the team can consider its project more perfect than the Ethereum, but the question arises, what is the decisive advantage of Cardano, because of what the user will prefer it, and not someone from the top three crypto, already having a network effect and the generated popularity.

If this is immutability, then it is unlikely that Cardano's blockchain is absolutely unchangeable, as well as any other blockchain system, including Bitcoin, because the consensus of the vast majority leads to a consensus mutation, as the echoes of Ethereum and Bitcoin clearly showed.
The separation of the transactional layer with the calculations begins to practice almost all large blockchains. The voting control mechanism can not be called a new invention either - it's one of the key features of the Tezos blockchain, not to mention the fact that the decision on TheDAO's hard-core was applied with CarbonVote voting.
Other features of Cardano: a new programming language for smart contracts and the fact that the platform code is written not in C ++, but in Haskell.
Yet these differences are minimal compared to the giant gaps in the network effect. Nevertheless, competition is always good, because newcomers keep leaders "in good shape"; ready to bite off a piece of cake in case of a miss of giants.