Telegram allows for the possibility of refusing a public ICO 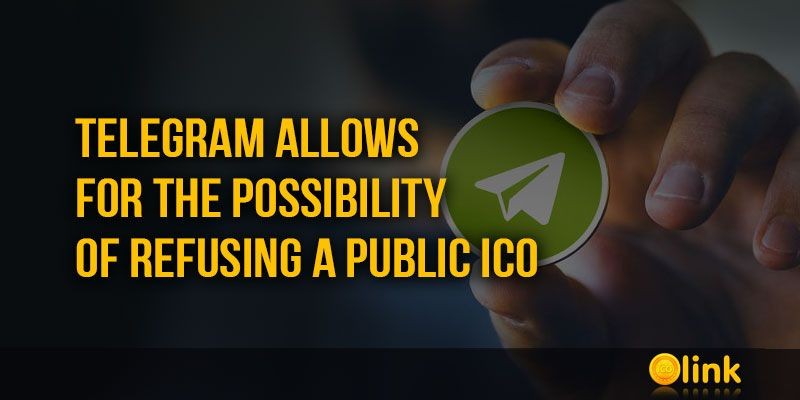 Telegram Open Network may refuse to hold a public ICO. The company is ready to conduct a closed sale of tokens among a small number of investors and attracted the "iTechCapital" and "Da Vinci Capital" funds for their search. The public ICO (initial coin offering - the initial placement of coins of cryptocurrency or tokens that give their owners certain rights) of the project of the Telegram Open Network (TON) by Pavel Durov, which was expected in March, may not take place. The company is ready to confine itself to two closed investment rounds among qualified investors, and to allocate a part of the tokens to the development team of TON. This follows from two presentations for potential investors. These are materials in which on behalf of venture funds "iTechCapital" and "Da Vinci Capital" investors are invited to participate in the ongoing second round of the closed sale of TON tokens. Three investors confirmed their authenticity.

According to the proposals outlined in the presentation, the total amount of funds that TON plans to attract from all investors is up to $ 3 billion. The company intends to issue 5 billion Gram tokens. 52-54% will be distributed among investors of the first and second round of closed sale of tokens, another 4% will be allocated to TON developers, and 42-44% of tokens will not be sold out and will be retained as a reserve.

According to some sources, TON can really refuse from the public ICO: "They even have the opportunity to collect the entire amount they need, even with a closed placement - there are a lot of offers from investors. Moreover, they can now refuse "unsuitable" investors, which cannot turn out for public placement. "

Previously, several interlocutors from the Russian venture industry reported that they had received venture funds from the second round of ICO Telegram, and they were invited to bring their shareholders to the ICO.

As previously reported, the investors of the first round of TON were the founder of "Qiwi" Sergey Solonin, who invested $ 17 million, and the founder of "Wimm-Bill-Dann", David Yakobashvili, who invested $ 10 million. In total, 81 investors participated in this round. $ 850 million collected in February, according to documents filed by Telegram Group Inc. and TON Issuer Inc. to the US Securities and Exchange Commission.

The second investment round for a limited number of investors is being carried out now, the price of the token in the course of it has increased significantly. If in the first round it was $ 0.38 per one token, then in the second round - from $ 1.1 to $ 1.45, it follows from the proposals for investors. According to these materials, "Da Vinci Capital" intends to register a separate structure in the Cayman Islands - DVC TON Fund - to participate in the second round. This fund will accept payments from investors in dollars and then transfer funds to a legal entity that will sell tokens - a tokenizer. DVC TON Fund can invest up to $ 50 million.